So I would start with ‘Weirdest Thing Ever’, but then again it’s my life so we’ll just call it Monday … we have trash and recycle pickup today but because the trash men come early, last night we put out 2 garbage cans and 2 very full and heavy black garbage bags for morning pickup, normal so far … when I took my oldest to school at 7:20 I noticed the black bags gone and was going to bring the cans up but left them for the kids … while making my 2nd cup of tea at 8:15, I heard what I thought was the recycle truck which always comes after the garbage truck but never a specific time of day … we don’t put our recycle down at night because people go through it and even though I know it’s not for malicious intent, it still freaks me out …. Half-dressed I run out, grab the recycle bin and run to the recycle truck waiting at the end of my driveway only to find out it’s the garbage men still emptying my cans into the truck … OK, very odd, then who the hell took my black bags? … I attempt to talk to the garbage men about it but there was a tad of a language barrier so I head back into the house …. Still puzzled, I tell the remaining 2 kids and the youngest is convinced that the garbage men came twice, but the middle and I knew better … no crying over missing garbage and at 8:25 off to school we go …. Half way between the house and school, sticking out like an Italian in Tennessee (yes that’s happen to me, another story for another day), we see a man on the side of the road with a cart full of about 2 dozen full black garbage bags, what are the fucking odds … now I am on a mission …. Narrowly escaping the old man in the blue Toyota with the handicap thingy waving from his rearview that almost ran his stop sign, I get to the school in record time, slow down enough for the kids to get out as I yelled, “Get Out Mommy’s on a Mission”, and like a heat seeking missile I go to find my trash …. And like a dear in headlights, there he stood in the same place he was before, almost like he was waiting for me … I pull over, roll down the window and we size each other up for a second … when I was positive he was indeed the trash stealer and not a gardener hauling leaves and gardener stuff,  I make my move and say “did you take my black bags” as if my bags were  any different than the rest  of his score … looking at me like the crazy lady I am, “No” he says as he lifts a fairly light one obviously full of aluminum  “these are from blah blah blah” (I couldn’t hear the rest over the honking traffic I was blocking behind me) … I took his word for it knowing our trash was much heavier  and quieter, then politely wished him a nice day as I started to drive off;  but don’t think for a second I didn’t eye the rest of the bags trying to identify ours … finally back at home, I will always wonder where my precious trash wet but will took comfort in know that all my recycle was still on the curb where I left it and oddly even spent a few moments rearranging it  … Yes I acknowledge it takes a special kind of freak to give so much time and energy to tracking down things we were trying to get rid of in the first place … then as irony would have it, during my Angela Lansbury moment,  I receive this pic via text from one of the few people that truly embraces my  Freaky Fabulous self  and it makes me realize how lucky I am to have just enough sanity left to keep these obviously demented people in my life, and you know who you fabulous  people are! 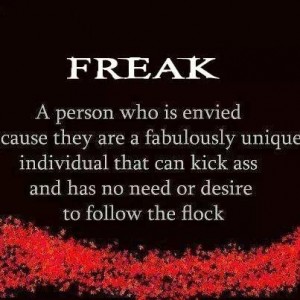